She Likes to Sew is reader-supported. When you buy through links on our site, we may earn an affiliate commission.
As an Amazon Associate I earn from qualifying purchases.

How to Thread a Kenmore Sewing Machine Kenmore has produced great sewing machines that have pretty much been the sweethearts of many passionate sewers for decades. You may not know that these were produced exclusively for Sears by Janome.

Therefore, it’s understandable if you don’t know where to look and who to turn to when there is an unexpected thread break while you are using your machine – especially considering the probability that the user manual that came with it is nowhere to be found because it’s sitting in landfill in some distant state or country right now.

But don’t you worry! I am here and I know how to thread a Kenmore sewing machine, and there is nothing stopping me from sharing this valuable piece of sartorial knowledge with you.

How to Thread a Kenmore Sewing Machine: A Step-by-Step Guide

There are four main steps you’ll have to go through when threading a Kenmore. These steps by themselves might sound quite easy, but the trick is conducting them with utmost care and precision possible.

So, let’s get to work and do that!

No matter what model you have, you’ll see two wheel-shaped handles on the right side of your Kenmore – the one on the inside is the clutch knob whereas the outer one is the handwheel. Our first move is releasing the clutch by turning the knob anti-clockwise.

Our second move is placing the spool of thread on the pin – the pin will be located on the right hand side of the upper console of your sewing machine for most models. The spool has to be placed in such a way that its winding is in anti-clockwise motion.

You’ll see a small tension disc probably sitting right in front of you towards the left-hand corner of the machine. You’ll have to pull the thread from the spool pin and carefully wrap it around this small disc by starting from the right side of it, covering all the left side, and immediately leaving the disc from the lower right corner. Don’t give it a full wrap, though – if you do that, you will eventually return to this webpage (and, considering the views I’ll get, it wouldn’t be that bad now, would it?).

Now we are going back to the upper right side of our veteran machine to find the bobbin and thread our thread through one of its holes on its top disc. Having done that, you can put the bobbin back in position to the winder shaft. Make sure it’s secure in its place by heeding the clicking sound it’ll make once it’s in place.

Did you let go of the thread coming out of the bobbin? Don’t! If you did, go back and catch it and hold on to it, because now we are going to start our machine to wind the bobbin. The winder will stop by itself at some point – you should continue winding up until that. Once it stops, cut the thread that comes out of the bobbin, leaving just a small part of it in place, and turn the clutch knob clockwise while also looking at an analogue clock and making sure you are doing it right.

Our second move is raising the needle by remembering the handwheel mentioned in the first move of our first step and turning it anti-clockwise. Once the needle is in its highest position possible, you can stop turning the handwheel.

Returning to the bobbin shuttle we have just uncovered in a manner that would make Indiana Jones and his party green with envy, pull the latch on the bobbin case to release it and insert the bobbin you just wound in a way that it would wind clockwise. You’ll see a slot on the upper side of the bobbin case – the thread from the bobbin should be slipped through this slot.

For our last move in this step, you’ll have to pull the latch on the bobbin case once again, but this time, you are pulling it to return the case to its shuttle. Make sure it’s soundly placed by listening for the clicking sound.

You’ll see a lever on the upper left corner of the machine, in the same vertical line with the needle – that’s the take-up lever. Just as we raised the needle to its highest point in the second step, we are going to raise this lever by turning the handwheel anti-clockwise. Then, we will have to locate the presser foot lever, which is generally just behind the needle, and use it to lift the presser foot.

Just like we did in the first step, we have to place the thread on the spool pin once again. After that, we are going to pass the thread through the rear thread guide, which is at the back of the top console and to the left, and draw it toward ourselves to the front of the machine.

There should be two thread paths on the frontside of your Kenmore from the top to the bottom, one labeled A and the other B. You should thread the thread down through the A path and up through the B one. Once you complete the upwards motion of the thread, you’ll see a tension spring at the end of the B path – you should secure the thread into the tension spring and draw it back to the front of the machine again.

Once you get right above the needle, you’ll see that there’s another guide there – guide the thread through that as well. After this arduous quest, our thread should be somewhat happy, because it can now finally meet the eye of the needle. Put it through the front of the eye and pull it from the back. Depending on the position of the needle, you may have to do this move from left to right instead of front to back.

Step 4: Pick Up the Bobbin Thread

Now that we are nearing the end of the article, I feel like an Olympic athlete who approaches the finishing line in an empty stadium, panting, feeling not the glory of success but only the absence of it, and just like that athlete, I am holding my head up high despite the direst of circumstances and rotating the handwheel once again towards myself. While turning the handwheel clockwise in full rotation, you should also hold onto the thread.

Remember the bobbin thread that was slotted through from the bobbin case under the extension table? It should appear as a small loop. Now is the time to pull it up and thread the top thread through this small loop. Both threads should now be able to go underneath the pressure foot and to the back of your Kenmore sewing machine.

And that’s it! You just successfully threaded your lovely Kenmore. May it serve you for years to come!

It’s easy to blame, curse, and occasionally kick an old and defenseless sewing machine when it’s breaking thread and making weird noises even though the machine in question is a golden oldie. However, in my experience, when a Kenmore machine is not doing what you want it to be doing, it’s mostly due to imprecise and sloppy threading.

I’d get it if you said: “Well, Kristina, how can we be precise when all we have is your written words and stupid, blabbermouthed jokes along the way? Isn’t it unfair to expect us to do a great job under such circumstances?” That’s why I am also going to recommend you watch all the video tutorials you can find for the task at hand.

Remember also that the first time is the most difficult. It may happen that you cannot hold onto the piece of thread because your hands got all sweaty due to anxiety and whatnot or develop weird ideas about how the hands of a clock move as if you’re having a fever dream and cannot shake off the feeling that the clock is actually a clown who is trying to hug you. Don’t let these discourage you.

If I can do it, you can do it as well, and once you get the hang of it, you’ll start writing your own sewing blog since knowing how to thread a vintage Kenmore is such a threshold – a threshold of wisdom, a gateway to outer worlds, a rapture of consciousness. How to Fix Large Hole in Leather Couch 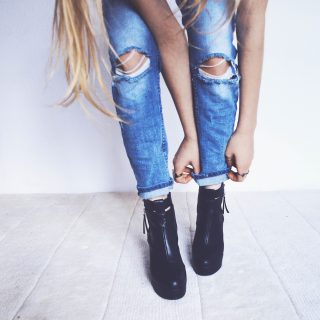 How to Fix Ripped Jeans How to Sew Stretchy Fabric How to Make a Kimono How to Make Jeans Bigger How to Make Fabric Pumpkins

What Is the Best Sewing Machine For Leather?

The Best Sewing Machines For Kids

The Best Sewing Machines For Beginners In 2020

Find The Best Heavy Duty Sewing Machine For You